As one of the sponsors, we are very proud that this terrific resource was officially launched at Stormont in October, and has support from CCEA and Tourism NI as a legacy project for the NI Year of Food and Drink. 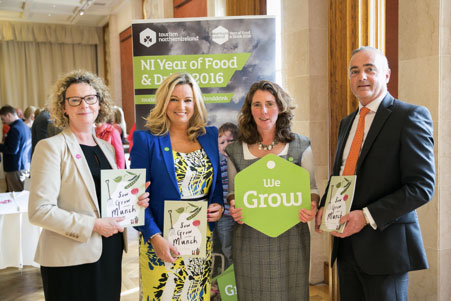 Sowing the seeds for future generations

An initiative aimed at encouraging school children to grow, cook and eat local produce was launched this week at Parliament Buildings by a leading producer and food campaigner.

The Sow, Grow, Munch schools’ initiative, which has been created by Jilly Dougan, was officially launched on Monday at a Stormont event hosted by Jo-Anne Dobson MLA. Supported by the Council for the Curriculum, Examinations and Assessment (CCEA) and Tourism NI, the guide will form part of the legacy of 2016’s Year of Food and Drink and will give young people the opportunity to learn about growing whilst developing learning embedded in the Northern Ireland curriculum.

The launch was attended by a plethora of food lovers, industry professionals, MLAs from across the political spectrum and deputy First Minister Mr Martin McGuinness.

Jilly, who is also known for creating productive herb gardens for hotels and restaurants, said her ‘how to’ guide to vegetable and fruit gardening came about as a response to a disparity between schools in gardening capabilities.

“I have been in and out of lots of schools and some have really fantastic food growing initiatives. However, some have nothing in place or they have a garden which is overgrown and unloved with really keen teachers who don’t know where to start. I saw a need for a simple guide, which was specific to our climate and the school year. The guide isn’t just about growing though, it’s about local food and how to cook simple food from scratch.”

Jo-Anne Dobson MLA, who hosted the event said, “Sow, Grow, Munch is inspiring a generation of young people to think smarter when it comes to what they eat. This is a fantastic initiative, both online and offline, to engage our young people, increasing their knowledge and leading to healthier and happier lives. It gives me the greatest of pleasure to host Jilly and Sow, Grow, Munch at Stormont and to support her in seeking the continued backing of Government to promote a new, fresh and locally grown concept.”

Growing food in schools has many benefits; children learn where their food comes from, and how it is produced. It encourages healthy and seasonal eating, is great exercise, encourages team work and can double up as an outdoor classroom.

These benefits have led to the guide being incorporated into a much larger project in collaboration with Tourism NI and CCEA as a legacy of Year of Food and Drink 2016.

Director of Education at CCEA, Mr Richard Hanna said, “CCEA is pleased to support this legacy piece of the Year of Food and Drink 2016 and to partner with Tourism NI on this project which will see us develop an online education resource to promote healthy eating and growing.

“It will give young people the opportunity to not only learn how to grow produce but to support and further develop important learning areas already embedded in the Northern Ireland curriculum such as literacy, numeracy, science, entrepreneurship, employability, cooking, hygiene and the environment”.

Carolyn Boyd of Tourism NI said, “Tourism Northern Ireland are proud to partner with both Jilly and CCEA to ensure that The Year of Food and Drink 2016 has a legacy beyond the year and far into the future.”

Sow, Grow, Munch is free to download on both the Eco-Schools NI and Education for Sustainable Development websites.

Jilly added, “It was important to me that the book was free to schools and educators as I know resources are always limited. I am completely indebted to my sponsors who believed in the project enough to pay for the design and print of Sow, Grow, Munch. It shows great collaboration within our local food supply chain that the sponsors were Irwin’s Bakery, Forest Feast, Food NI, NI Stakeholder Potato Promotion Group, Yellow Door Deli, Ulster Farmers Union and Armagh, Banbridge and Craigavon Council’s Food Heartland – a combination of private companies and public sector bodies and organisations.

“I am so pleased that CCEA and Tourism NI have taken up the reins and have such exciting plans for the concept, and how it will be used to augment and enhance the curriculum.”